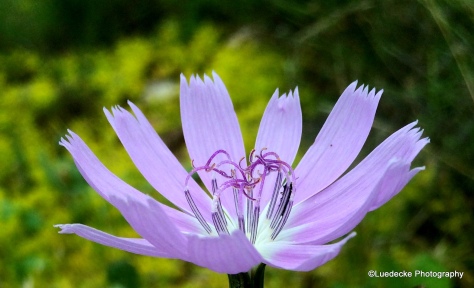 According to Texas A&M AgriLife, “Skeleton Plant has a slender stock and fleshy root system. It can range in size from twelve to twenty-four inches in height. Most flowers are found in open, sandy to clayey sites or slopes and prairies of the South Texas Plains and the Edwards Plateau. The leaves are four to six inches long and the purple flower is 1 5/8 to 2 inches in diameter. Skeleton Plant blooms from April to August.”

When you are walking through fields, along trails and you view the Skeleton plant from the side you will see why it is called a skeleton plant. It has very few branches extending from it’s stalk, like a “skeleton crew.” They are a hardy perennial herb native to the Highland Lakes area. So, don’t just stop and smell the roses, look for purple too. 🙂

Taste of Nature Programs:
Feb 8: Bats – curious critters of the night
Feb 22: Monarch’s and other butterflies – nature’s beautiful dancers
Mar 7: Trees – the beauty and majesty of our hill country woods and forests
Mar 21: Balcones Canyonlands Wildlife Refuge – a unique habitat right in our backyard
Apr 4: Invasive Species – more than just the zebra mussel to worry about
Apr 18: Geology – take a trip through a billion years and never leave Texas!
May 2: Birds of Texas – getting to know our fine feathered friends